Discover More!
No matter their industry or size, organizations around the world aim to create a cohesive environment where people can work together to innovate, experiment, and grow.

The root of success for both individuals and the company as a whole is to understand how people work and what they value so they can communicate well and work together effectively. One of the best ways to do that is through personality assessments to measure each person’s traits and values. The DiSC personality test is one of the most effective ways for employees to develop self-awareness and work more efficiently in a team.

DiSC services in Denver can help your team reach its highest levels of efficiency and success.

What Is The DISC Personality Test?

The DiSC personality test is an assessment aimed to improve communication, teamwork, and productivity in workplace teams. The name stands for the four main personality types described in the model: dominance, influence, steadiness, and conscientiousness. Everyone is a blend of all four types, and no one type is better or more important than another. After taking the test, people find out where they fall on the quadrant of the four areas and how strongly they have each personality type.

The idea of four basic personality types has been around for thousands of years, dating back to the four elements of fire, wind, water, and earth in 444 BC. The modern test was developed in the 1940s by Walter Clark and based on research by William Marston in 1928.

The idea behind the DiSC test is for people to better understand themselves and the people around them. By distilling personality types down to four main areas, team members and colleagues can use the same language to better understand each other. Understanding each person’s personality type allows teams to reduce and navigate conflict resolution and work together more effectively.

When using the DiSC assessment, people are given a series of statements and asked to measure how much they agree with that statement on a five-point scale ranging from strongly disagree to strongly agree. There is no wrong or right answer on the DiSC assessment because it is unique to each person’s personality.

Results are given after taking the test to indicate each person’s personality type. It is important to go beyond just the personality type with a detailed DiSC consultation to truly understand the results and use them properly in the workplace. 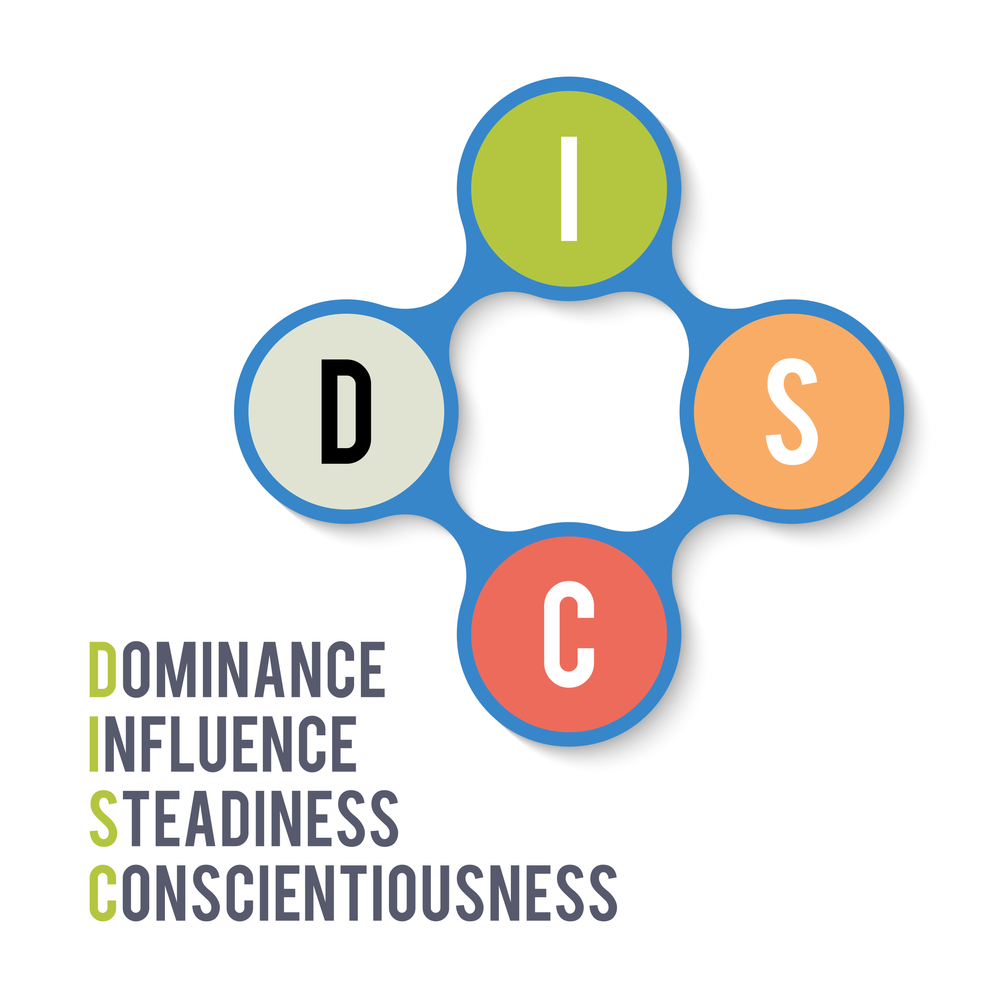 How Efficient Is The Disc Personality Test?

The DiSC personality test has is used by more than 1 million people around the world every year, ranging from huge corporations to non-profits and startups across all industries in Denver. It is considered one of the most efficient personality tests. Although DiSC is used most often in workplace settings, it also has high validity and reliability in marriage and family relationships, education and classroom settings, and in other community groups. Connecting with DiSC companies in Denver can benefit any type of group or business.

One of the reasons the DiSC personality test is so efficient is its simplicity. With just four main categories and 12 possible combinations, DiSC narrows down the options to find more common ground between personality types. The visual component of DiSC with results shown on a circle is memorable and applicable. Instead of having to remember each person’s complicated personality type, DiSC narrows it down to a few simple options and a dot on a circle, which is far easier to remember.

But just because DiSC offers relatively simple results doesn’t mean it isn’t accurate and effective. The test purposefully measures the most important aspects of interpersonal relationships, including things like dominance and submissiveness, that most other personality tests don’t measure. The four personality types of DiSC have the greatest impact on collaboration and conflict in the workplace and are designed to foster an environment of understanding and productivity.

DiSC also stands out because it measures behavior more than intelligence, aptitude, or values. Essentially, it tracks what people do instead of what they are good at. The behavior-based measurements are incredibly effective in a workplace setting because it allows leaders to create teams based on how people act, work, and communicate.

What Are The 4 DiSC Personality Types?

People that align with this personality tend to be confident, independent, and self-reliant. They emphasize on results and big-picture thinking and prioritize accepting challenges as well as taking action. People with the D personality like to take risks and work in a fast-paced environment. They are not the people to sit idly by or in the back of a room. People with the D personality can be strong-willed, blunt, and demanding and tend to forget to include others in their problem-solving and decision processes. They are motivated by competition and winning.

People with this personality are appreciative of relationships and social recognition. They want to influence and persuade other people and appreciate verbal recognition. People with the influence personality are most often seen as warm, convincing, and enthusiastic. They want to act, collaborate, and coach other people. These people influence others with their charm and optimism, but can also fall into the trap of gossip and not following through on tasks. They prefer to not have a set routine or structure. People with the I personality tend to be strong communicators and prefer to work in environments with a lot of teamwork and collaboration.

People with this personality tend to be sincere and dependable and are often seen as peacekeepers. They are calm, patient, and predictable and fear change and offending others. They value cooperation and sincerity. Their personality traits include being good listeners and mediators and seeing things from multiple perspectives. People with this personality are consistent and accommodating, but can often lack confidence and keep their needs to themselves. They prefer a slower-paced work environment where they can focus on people instead of rushing through tasks, and they tend to not take big risks.

People with this personality value quality, expertise, and competency. They are often viewed as analysts and perfectionists and are motivated by learning, showing their expertise, and doing quality work. This personality type is seen as careful, accurate, and tactful. They are highly organized and logical. People with the C personality are task-oriented and thrive in a slower-paced environment where they can take their time to research and analyze. They use logic to interact with others and fear criticism and being told they are wrong. When faced with criticism, these people tend to rely heavily on facts and data, often without seeing the emotions of the people behind the issue.

Along with the four main categories are sub-categories and combinations of the various personality types for a total of 12 DiSC profiles.
DC: Dominance and conscientiousness. Often referred to as a challenger, people with the DC combination tend to be natural leaders who focus on challenges and accuracy. They are self-motivated overachievers who tend to move quickly to reach short-term goals.

DI: Dominance and influence. Also known as the seeker, people with the DI personality type are creative and innovative. They are enthusiastic and take action quickly, but don’t tend to be very detail-oriented.

ID: Influence and dominance. People with this personality type are risk-takers and passionate about their work. They want to work in an unconventional setting and share big, bold ideas.

IS: Influence and steadiness. People with the IS personality type are known for being empathetic and peaceful. They are good listeners who tend to lift and encourage other people ahead of themselves and aim to make every team as peaceful and encouraging as possible.

SC: Steadiness and conscientiousness. Also known as the technician, people with this personality type are focused on getting the job done right the first time. They are organized, disciplined, and meticulous and often work better by themselves than in social groups.

SI: Steadiness and influence. People with this personality type are all about collaboration. They thrive in a team environment and enjoy bringing people together. They develop strong relationships and can be great leaders.

CD: Conscientiousness and dominance. These people are often referred to as perfectionists because they are focused on details and seeing a project through all the way. They tend to be dominant in groups and are often in leadership positions.

CS: Conscientiousness and steadiness. People with this personality type are solid and dependable. They often serve as the foundation of a strong team because they are steady and responsible. They thrive in settings with routines and expectations but can be shy and fall to the back.

Why Is A DiSC Consultation Important?

After taking the DiSC assessment, each person’s results are plotted on a circular image of the four personality types. A DiSC facilitator can explain the meaning behind the location of the dot and provide further guidance about what the results mean. A consultation is especially important for people whose dot falls towards the center of the circle, meaning they are strongly tied to multiple personality types.

DiSC results also come in the form of one or two letters. Everyone is a combination of all four DiSC personality types, but one or two tend to be most dominant in most people. A score will put the strongest personality type first, followed by the secondary type if the results are close.

For example, a person could be just D or could be Si or CS. A consultation can help best decipher the results to provide DiSC training and explain how the various personality types work together.

One of the most popular personality assessments is the Big Five, or the Five Factor Model. This test breaks down a person’s percentile compared to the general population in five areas: openness, conscientiousness, extraversion, agreeableness, and neuroticism. Scores are given are percentiles, meaning you may have higher openness than 82% of the population and higher extraversion than 17% of the population.

There are many similarities between DiSC and the Big Five, as well as pros and cons to each method. Both methods have been studied extensively and proven to be scientifically accurate. The five areas of the Big Five tend to correlate fairly well with the four DiSC personality types. The Big Five is relatively easy to understand but difficult to compare between colleagues.

In general, although DiSC has been studied less than the Big Five, it is still very well-proven and useful in a variety of situations in the professional world, compared to the relatively limited and individual use of the Big Five.

The DiSC personality assessment is a powerful tool in not only building self-awareness, but also in creating more cohesive and efficient teams. But the test itself is not enough—it must be paired with a consultation to truly understand and apply the results. Utilizing DiSC assessments in Denver and consultations can transform your team and organization to create a forward-thinking and effective group.

Get Started with DiSC